The result of a decision made at the UNESCO session in Paris in 1999, March 21 is the day assigned as World Poetry Day, a day for cultural organisations, schools, libraries, and publishers worldwide to celebrate the art of poetry. Poetry is one of the purest expressions of linguistic freedom. It captures identity, emotion and embodies the creative energy of culture, and what we find particularly fascinating about this art, is that it can be continuously renewed and reshaped across the generations.

‘Gravity’s Law’ a short film by Gate director, Matt McDermott, is based on a poem by Rainer Maria Rilke, first published over a century ago in 1905. Rilke’s poem suggests that we belong naturally at a deep level in the heart of the world and it’s only our egoism that causes us to push out beyond our true purpose.

How surely gravity's law,
strong as an ocean current,
takes hold of the smallest thing
and pulls it toward the heart of the world.
Each thing---
each stone, blossom, child---
is held in place.
Only we, in our arrogance,
push out beyond what we each belong to
for some empty freedom.
If we surrendered
to earth's intelligence
we could rise up rooted, like trees.
Instead, we entangle ourselves
in knots of our own making
and struggle, lonely and confused.
So like children, we begin again
to learn from the things,
because they are in God's heart;
they have never left him.
This is what the things can teach us:
to fall,
patiently to trust our heaviness.
Even a bird has to do that
before he can fly.

As humans we push hard against nature to propel our own evolution, in his short film, McDermott taps into themes of meditation, mindfulness and nature in a deliberate response to the overload of information in modern society today. Nature can teach us to let go of striving and trying to control life, ‘to fall, patiently to trust our heaviness’. These issues differ greatly in comparison to Rilke’s observations during the Industrial Revolution, however, Rilke’s message still powerfully resonates today. 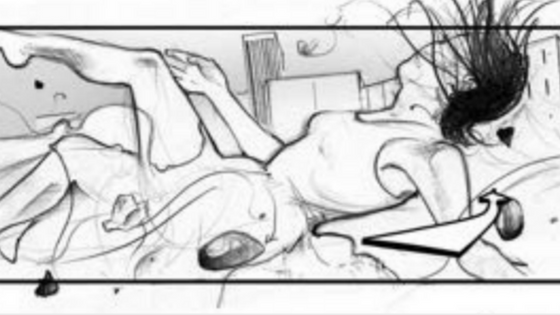 A Society Trapped by 'Empty Freedoms.'

As a society, we spend a disproportionate amount of time glued to screens. We record, share and promote aspects of our lives through social media rather than experiencing each moment and being fully ‘present’ in the moment. Humans are striving to prove their own existence rather than actually living it. In our modern technological society, we're becoming more and more stretched to make ends meet and are often forced to live and work at an inhuman pace, ‘push out beyond what we belong to.’

There is a demand to maintain this fast pace and as a comfort, we reward ourselves often by buying material objects, status symbols and promoting our success in life on social media. These are all modern day examples of ‘empty freedoms’.
McDermott’s film is a visual representation of the poem and powerfully illustrates it’s themes which are equally, if not more, prevalent today as they were when the poem was written. McDermott has resurrected the poem, retelling it in an exciting, modern context and raising the question of our connection to our planet and to nature.

One of McDermott’s key ambitions was that the film had a meditative quality. Moving away from the tight constraints of typical 30-second edits for commercials, ‘Gravity’s Law’ left space for the audience, literally and metaphorically, to breathe. It was essential that the audience could submerge themselves fully and absorb every moment intrinsically.

During a one day shoot at The Barbican Centre, we used a Phantom 4K camera and kit to enable us to shoot 1,000 frames per second. It allowed us to capture split-second moments during the fall sequence and gave us the freedom to prolong beautifully graceful shots that lasted a few minutes for each fleeting moment. This exaggerated timeframe created a surreal quality to the finish. There were minimal enhancements made in post-production, the flora and botanicals were filmed in-camera but given an extra boost with CGI to give them an otherworldly quality.

A Striking Visualisation of Rilke's Poem.

The heavy and foreboding brutalist architecture of  The Barbican Centre was the central location for the film, the striking man-made environment is juxtaposed by striking and graceful shots of performers in among these dramatic surroundings. The performer’s movements are ethereal, we see the figures floating in mid air - the footage is speed ramped, slowed down and looped back and forth to capture the fluidity of movement.

The photography uses high contrasts with hard and soft lighting, experimenting with light and shade as a metaphor for consciousness and unconsciousness. Using cutting edge CGI, we then see the performers starting to grow natural elements on their bodies which eventually envelope them and disintegrate their bodies which return back to nature.

Waking up to the Important Things in Life.

The film is a strikingly beautiful and occasionally melancholic visualisation of the poem but not a literal one. McDermott highlights that the images are open to interpretation so the audience can attach their own meaning and ideas. What McDermott has created is a profound and thought-provoking film that will spark debate in a fascinating and universally important subject matter.

We'd like to give props to all the incredible humans who made this happen - we are truly thankful.