Peter Lydon has created ads for brands like Carlsberg, William Hill, Mars and Sky, combining great comic performances with a cinematic eye - and now he’ll be collaborating with The Gate Films as we welcome him to our roster of directors.

What do you enjoy most about shooting for brands?

I just love telling stories. The challenge of a short script that's 30 – 60” is about unlocking the meaning, efficiently and entertainingly. Ultimately, everything that's put onto film, however long it is and whatever its objective, has got to entertain. A commercial’s objective is to sell something, but you can't sell something unless you’ve engaged your audience. My job is to find a way to deliver that message. So that means either delivering the message that's there on paper, or taking the script and making it work more efficiently, unlocking its potential.

Which project has been your most enjoyable to date?

The ones that were most exciting and fulfilling, and helped move me forward as a director, were probably for Carlsberg and Sky Broadband. For Carlsberg I got to work with a consummate professional, and legend, Mads Mikkelsen who brings all his skills, intuition, and energy to the project. Even though it’s a commercial, it was still a piece of filmmaking to him and needed to be just right. The beauty of having someone of his stature is that he takes a good idea and makes it great, through his skills and his sheer presence.

The other campaign that looms large was for Sky and WCRS. I got to make nine big films over the space of a year where we used fairy tales and legends to promote Sky broadband. We shot in some amazing locations from China to South Africa to Portugal. It was always about attention to detail, from costumes to casting to music. I think it was the last time I shot on 35mm. They were like mini movies and all really funny.

How do you push a script to exceed client expectations?

I think the job of a director is to take what a creative team has put on paper and show how to make something that exceeds their expectations. Sometimes the idea is there and complete, you just have to breathe life into it, without getting in the way. Sometimes the message is not entirely clear but there’s an idea or intention in there waiting to be dug out and built on. In this way I see commercials scripts as puzzles to be solved. I look at a script and think, OK, I know what they're doing here, but what if we turn things inside out or upside down. Put the beginning at the end or
the end at the beginning as a way of unlocking the story. That’s a process I learnt making documentaries many years back, where you could really challenge the form.

Which clients have been a dream to work with?

When you get to work with the same team again and again you know you're doing something right. I had that experience with Sky and WCRS. I had it with Carlsberg and Fold 7, with VCCP and Muller. In all those cases you develop a shorthand with the creatives and get to start chewing over the idea at an early stage. It is no longer all about the dreaded treatment.

Over the last couple of years I did five campaigns for Cheil India and MG Cars. That relationship kicked off with two campaigns featuring Benedict Cumberbatch. I’d worked with Benedict before and “his people” wanted someone he felt comfortable with. As a result there was no pitch. Instead I became very much an extension of the creative team, writing the scripts with their ECD. We would start talking about the concepts and scripts before anything had been set in stone, which allowed us to think freely in terms of what we could and couldn’t shoot. Matching the creativity to the resources.

Have you had to work in any challenging locations? How did you handle it?

I'd say the hardest was probably in South Africa.  Conjuring up King Arthur for Sky Broadband. The creatives wanted the Round Table up a mountain… so we went up a mountain! It involved a lot of ferrying of cast and crew with helicopters and as we were dealing with tricky weather it made things a bit hairy! But it was worth it as the ads looked amazing.

I'd say the hardest thing is if you’re working on water, particularly at sea, which I’ve done a couple of times. On the ITV series “Island At War” about the Nazi occupation of the Channel Isles we had a night scene at sea. A soldier trying to escape in a small fishing boat from a German gun boat. We found ourselves working in gale force winds in the dark. Both scary and sick making. We abandon it eventually and finish off in the tank at Pinewood. But what we did get in that real stormy sea was pretty cool and made the sequence.

Who is the most important and or influential person for you in the world of film right now?

I think in terms of inspiration I would offer up contrasting names. The Italian director Paolo Sorrentino (Hand of God, The Great Beauty) is both a consummate storyteller and an extraordinary visual stylist. In the other corner there’s Noah Baumbach who’s the kind of New York heir to Woody Allen. His films are consistently inventive, while charting a very tight course, always pushing relationship comedy-drama to its extreme. As a lover of great screen dialogue, he’s my go to filmmaker for inspiration.

And then there’s Korean cinema (and TV) turning out genre bending work that has us all in awe. It has a compelling darkness because of the amount and style of the violence, that’s ever present. But the grown-up view of relationships wrapped up in such visceral filmmaking is a wonder to behold.

Do you think filmmakers have a responsibility to make challenging, socially conscious work?

I don’t think so…  but I think where they can, they should. Filmmaking is an information medium and can speak to a huge audience, so if a filmmaker has a reach, has something to say and the skills to say it, they should use those for the greater good. In our world of commercials our hands are somewhat tied but that’s fine. I think because our industry tends to feel a bit guilt ridden for being in the business of shifting units, we often get over excited by worthy work that then gets over celebrated. We rarely celebrate a piece of work for its ability to sell stuff!

When inspiration is waning, when creativity is sapped, how do you stay inspired?

I think it depends, if you're in the middle of a set and everyone's looking at you to solve a problem and your mind is blank, you want to go into corner and hide but you can’t. You have to kind of bluff it out until inspiration comes knocking. Sometimes that's when the real magic happens!

Away from the film set I have a daily routine of heading to a café with a notebook where I think of ideas for cartoons - that’s my side hustle! It's about giving myself space and permission to create for its own sake. If they feel good enough, they go onto my Instagram feed.

How do you know when your story is finished and it’s time to walk away?

For a filmmaker, I suppose it's when you're told to stop. Or have to stop light gone or the overtimes run out.  You just hope that you’ve paced it so that you've got all the storytelling you need in the can. Often you finish a shoot and there are things that you haven't got that you wanted, and it bothers you, you don’t sleep well that night. Then you sit in the edit and you cut around it and you see you didn't need it after all. So essentially you work with what you've got, within the parameters you've got. 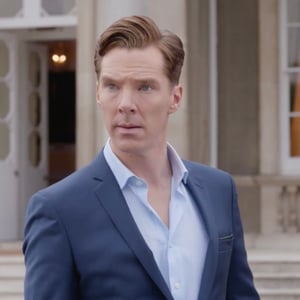 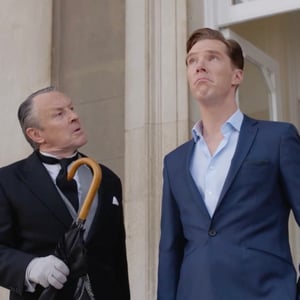 What non-film medium inspires your work?

Music. Definitely music. Music is a big thing. Either music to inspire or music to solve or heal. And cartoons… I am a big fan of the single panel gag. Think New Yorker or Private Eye.

Is the evolution of your style a conscious or subconscious process?

Both – I think that one immerses oneself in the work of other people. That can be film, theatre, literature etc. Things stick, things you carry with you, that marinate inside you. They then find their way into your work, consciously or unconsciously. And that I guess is your style.

I don't think I have an overt style, but I think I have certain things that reappear in my work because of certain kinds of stories that appeal to me – the term I use (or have appropriated) is urban comedy of manners. While I'm also super drawn to visceral filmmaking (Lynch, Scorsese, Sorrentino, etc) I wouldn't necessarily call myself a visceral filmmaker, but maybe one day…

How do you balance meeting commercial objectives without sacrificing your art?

You just do. Because that's why you're there. You haven't created the opportunity for yourself, someone else has. They've hired you and your job is to bring all your skill and craft to the problems in hand. Then you need to shape it with available resources, rather than stamping your feet and asking for more. I think that's always been my MO.

What’s going on in your world when you’re not looking through a lens?

When I'm not looking through a lens, I'm looking at a TV or a film screen or I'm looking at a notebook. I mentioned the cartooning side hustle. It’s something I only started a few years ago. My dream/ambition is a get a piece of work in the New Yorker. I think cartooning definitely feeds into my filmmaking. If you think about it, a good cartoon is a tightly constructed idea that jumps off the page and makes people laugh. 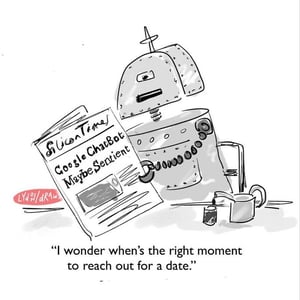 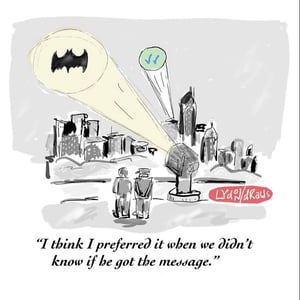 What’s your advice for emerging filmmakers wanting to make their stamp in the industry?

When I was an emerging filmmaker, it was much harder to find a niche and it was much more expensive to make a film of your own. I think it's an exciting time to be a filmmaker because the entry level is whatever you want it to be. You can make a film on an iPhone and it can go to and blow people away at Sundance, which is amazing. There are now less hurdles between what you put on a page and what you can then film. So I think my advice is to make stuff however you can - make stuff, write stuff, make stuff.

What are you most looking forward to with your adventure with The Gate?

I hope it’s an adventure… if it's an adventure then that's great. I've been aware of The Gate for a long time and I'm glad we have made this connection. I think that the idea of opening up access to creative work in a part of the country where I might be known but have had no one rooting for me till now, that's exciting. I can see that The Gate are a dynamic and busy company that seem to have a strong sense of their own identity. The very fact you’re going to the trouble asking me these questions to promote me in your part of the world is pretty cool. And I love Manchester having filmed 3 major TV series there in the past I can’t wait to get back!

Want to see more of Peter Lydon's work? Click here to check out his director’s page.