While we always like to bring the fun on set, the tone for our latest work with Northern Ireland’s Department of Justice had to be a little different. We’re so proud to have produced a 60second TVC and photography with Ardmore for their #EndingtheHarm campaign which seeks to raise awareness around illegal money lending and paramilitary gangs.

Northern Ireland’s Department of Justice was established in April 2010, following the devolution of justice powers to the Northern Ireland Assembly.  Their objectives are centred around Problem-Solving Justice - giving scope to drive forward new and more imaginative strategies, based on addressing the underlying causes of offending behaviour. Their campaign entitled “Ending the Harm” is cracking down on illegal money lending.

Paramilitary organisations and criminal gangs that have emerged from the legacy of the Northern Ireland conflict, target people when they are at their most vulnerable. The spot seeks to raise awareness of the impact of this largely hidden crime and to ensure that people and families affected know where they can find appropriate help and support.

“Ending the Harm” tells the story of how a young single mother’s situation deteriorates rapidly once she borrows money from an illegal lender.

From the minute we saw the script we knew Michael J.Ferns would be the perfect director for this project. The story has such a powerful message at the heart of it, all centred around our lead and we knew that Michael’s background in directing drama was going to be key to getting the right performance from her.

We turned to our favourite casting director Lee Mountjoy to help us find the perfect actor – for both the role of the girl, and for the voice over of the paramilitary man. Even though casting had to happen over zoom, we had a really strong short list to choose from, and our chosen female lead Tierna McNally gave an incredibly moving performance on set which perfectly captured the tone of the campaign.

The pace of the edit was integral to the storytelling, the pace needed to build and quicken as the young mum’s situation got worse and worse. The sound design was also an important and considered part of the edit to aid that feeling of building, growing tension. Michael turned to his favored composer Alex Wells to heighten the drama with a specially composed score.

Our photographer Graeme Hill did an amazing job of capturing the fear and desperation of our girl in the stills for the outdoor elements of the campaign. He worked quickly around the main crew, and used his experience as a director to get the performance we needed from our actor. 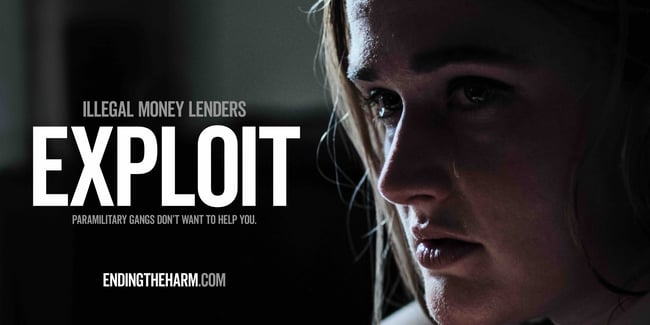 The campaign will run across TV, radio, digital and a series of outdoor sites in Northern Ireland.

“It was a privilege to work with The Gate again and especially on such a powerful campaign. The ease, pace and professionalism they apply at every stage makes the whole production so enjoyable, and they put together a hugely talented crew who all jointly have delivered something we’re immensely proud of.”