Last year we said a bittersweet farewell to one of our most talented and loved Directors, Si Mulvaney, as he embarked on a voyage of discovery across the globe.
Armed with his Sony A7S, a bag of lenses and a drone, Si was ready to capture whatever the world had to give him.

‘The World Obscura’ is an ethnographical insight into the world of tourists at the Taj Mahal, ‘Annapuma Sky’ explored Nepal’s Himalayan region from dizzying heights and ‘Under the Rope’ documented the story of inspirational Muay Thai fighter, Sylvie Von Duuglas-Ittu. The latter of which has garnered over 100K Vimeo Views and earned him a ‘Staff Pick’ accolade.

Have we whetted your appetite for all things Si Mulvaney? Well, here’s the thing… he’s back. He’s inspired and filled with more wonder than ever before - poised to bring this to your next script. 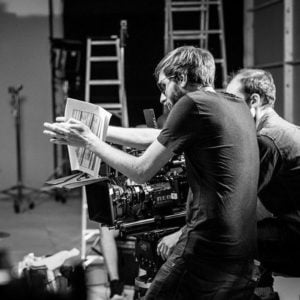 TGF: Si, we’re over the moon to have you back. Big question. What are the most poignant learnings from your travels?

SM: It’s hard to explain exactly what I learnt during this 15-month trip around the globe. The simplest and most ‘wankerish’ explanation is to say that I ‘found myself’, which is completely true, despite how ridiculous it sounds. And it’s not something that can be easily explained. It’s more of a feeling.

Something that fills you from the inside and gifts you with a highly focused understanding of exactly what you need to be happy. Luckily, it’s not much and I’ll try to explain in the shortest way I can. Essentially, all humans are the same. We need food, water, shelter and a sense of community. In my case, I’m lucky enough to be born into a very special set of circumstances that allow me to have plenty of food, fresh running water, affordable shelter and a fantastic community of family and friends.

With all that covered, all I have to worry about is how to best spend my time, which is by far my most precious commodity. Turns out, I didn’t have to go travelling to discover what I want to spend my time doing. I already knew. I’ve chosen to tell stories. A skill that hugely fascinates me and something that I’m dedicated to improving in. That’s what my year was about: learning about myself and learning how to better tell stories. And I think I succeeded in both.

TGF: What are the unique opportunities and challenges as a wandering film director?

SM: Luckily for me, gone are the days of having to live in London or LA to stamp your dedication on your filmmaking career. Now, you can live where you want and how you want. The only thing that matters is your ability to create. And that’s what I wanted to experiment with on this trip - becoming a location independent filmmaker with the ability to go anywhere, to make anything, all at the drop of a hat. And it was a hell of a lot of fun! My main challenge was to take it all back to the basics. If I couldn’t fit it into a small carry-on sized backpack, it was out. My production kit was small, agile and required only one person to operate.

The challenge was to become a better storyteller. You don’t need huge cameras and a 50 person crew to tell a good story. A good story is free. Only then, do you start to amass the necessary tools to bring it to life. In my case, these tools were minimal, which forced me to adapt to my environment, instead of adapting my environment to me. It was a lot of fun!

SM: When we first set off on our trip, I wanted to create mountains of content! A weekly travel vlog and a monthly film. 75 films in total! In reality, I ended up with 5 films, with an additional 3 (my best work) currently in post-production and 60 travel vlogs on their way!

The World Obscura’ is a social commentary on our obsession with social media and our yearning to be acknowledged. ‘Annapurna Sky’ is a sensory flight through Nepal's Himalaya region; from the claustrophobic chaos of Kathmandu to the epic grandeur of the Annapurna National Park. ‘Under The Rope’ is a short documentary about inspirational Muay Thai fighter Sylvie Von Duuglas-Ittu and the story of how a feminist from the U.S.A. fell in love with a foreign community that has gender inequality at the core of its values.

But then again, it doesn’t all have to be so serious! As long as I'm creating content, of any kind, I'm improving as a storyteller. So, with that in mind, I challenged myself to shoot a new piece of content every week. Here’s a rough-cut preview of episode 3 of 60 of my travel vlog, which teaches viewers the cost and ease of travelling long term. These are currently in post-production and will be released on a weekly basis over the next 2 years, starting in June.

TGF: What were your standout experiences?

TGF: On that note, where's your path taking you now you’re back?

SM: My only focus now is to make stories. The success of my film ‘Under The Rope’ taught me that as long as I’m making thought-provoking and creative content, I’ll be happy. I have a number of interesting international branded projects in the pipeline, which will see continuing my travel journey, and a feature-length documentary that is currently in pre-production.

Despite the travels, Manchester will always be my home. Simply put, it’s where my community is and will be for quite some time. When I first went travelling, I was worried as to whether I was making the right decision. Leaving a successful career in commercial filmmaking to travel the world had its risks. But in actual fact, through my constant focus on content creation, all it’s done is take my career to the next step. And I can’t wait to see what the future holds.

TGF: And we can’t wait either.