Spilling the Milk with Tommee Tippee

The thing with a lot of advertising is that it sugarcoats pieces of real life that we haven’t experienced yet. And then when reality hits, the shock is hard. We are so proud to share our Tommee Tippee campaign with you in collaboration with Manifest London, which will hopefully shed some well-needed light on the world of breastfeeding. Infamous for its spill-proof cups, Tommee Tippee is the 5th largest childcare brand in the world. A key player in the bottle-feeding category, they’re now looking to pave the way with breast pumping accessories too. With it’s soon-to-be-launched “Made For Me” range of breast pumps, breast pads and expressors, Tommee Tippee are on a mission to lead in this category by supporting mums on their journey, offering an array of product choices and demystifying the world of breastfeeding.

Shifting from the paradigm that pregnancy is this beautiful, ethereal experience full of clean white towels and talcum powder, this campaign exposes the reality that life can actually be a terrifying place for a new mum. What happens if the baby won’t drink your milk? What if your body isn’t producing any? Did anyone ever tell you about that?

‘The Boob Life’ was conceived by Manifest, who wanted to create something that was all about confidence and a moment worth celebrating. ‘The Boob Life’ is about tackling the universal impact of breastfeeding on a mum’s identity, sense of self, confidence and body image. It’s about undoing negatives and celebrating boobs and freedom. It will make all women feel great about their breasts, whether they breastfeed, soley pump with them, or don’t feed with them at all.

Through a series of positive, disruptive and emotive clips, we wanted to bring ‘The Boob Life’ to life by making breastfeeding not just about feeding, but empowering mums to express themselves. Their identity, their personality. Their passions. Their pains. Their pride. We’ll make everyday mums feel extraordinary. 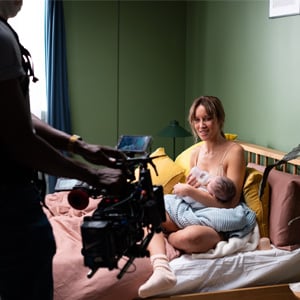 At the heart of ‘Spill the Milk’, we brought mums together to open up conversations that demystify baby feeding truths. We created a platform for mums to share their real boob moments, the ones NCT groups, doulas and healthcare professionals don’t tell you about, to support and empower expectant mums in their own feeding journey.

‘Spill the Milk’ is about real mums and real experiences. You’ll see and hear mums telling their own unique feeding stories on screen. This extends our campaign and gets a deeper, more authentic and richer narrative.

Our senior producer, Rhiannon Lewis, and her thoughts...

“The brief for this came in on the 27th of August - my birthday! My business partner James dropped me a text (I was doing my favourite thing - getting drunk at lunchtime), telling me he had a special birthday present - it was this brief.

“I knew from the minute I read it we needed to win it.  As a mother who has both breast and bottle fed, I’d never seen a creative that has actually spoken to me about the realities of being a mother. It’s all normally soft lighting, beautiful baby shots and this light fluffy world of baby magic...when in reality it can be dark and difficult and frustrating. The thing that impressed me the most was how this creative focused on the mothers, rather than the baby.

“During the pitch process, Manifest teamed us up with one of their favoured directors - Fiona Burgess. From the moment Fi and I began chatting it was obvious that we were both on the same page - our views on everything from breastfeeding to how to cast this piece were aligned. To get the call from Emily letting us know we had won the job was one of the best days of 2020 - the year of lockdowns and national anxiety. Which leads me onto how we produced a campaign during a global pandemic…”

Our casting team was headed up by our all time favourite casting director, Lee Mountjoy, with the support of our in-house PAs. They reached out to plenty of agents, but also to Facebook communities and Instagram influencers to spread the word far and wide. Lee asked people to send in self tapes and, from there, Fiona and Rhi conducted rounds of castings on zoom.

“The casting was all about searching the UK for new mums who were open to sharing their personal story, not only with me, but with a big audience. The big task was finding mums and their babies who were willing to be the face of such a big campaign for a well known brand while they were in the middle of raising a newborn baby and juggling life.

“Of course not everyone was interested, but, once we explained it was about empowering mums to express themselves and a way to show their identity, mums from all walks of life started to get in touch.They had seen our social media post about the project and wanted to know more, we were receiving hundreds of emails a day! In a business that is usually so fast-paced and decisions are made quickly, the challenge was slowing down to go through each submission.

“Listening to each story in full, asking them questions, connecting with them through Zoom calls and making sure we had a broad range of mums who all had a different story to tell. We did it! Each mum is so unique and I'm grateful they shared their story with us all.”

We shot the project over 2 days at our Foundry Film Studio. In one studio we had our sets built to shoot the hero campaign film and stills imagery, and in our green room we set up backdrops to capture some more in-depth interview content with our mums, titled “Spill the Milk”.

Hannah Wilson was brought on board to create different sets for our mums - some actual room sets, and others beautiful collections of textures and materials. 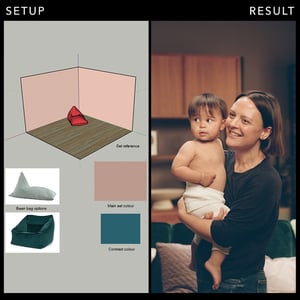 We asked director Fiona Burgess for an overview of the job...

What drew you to the project?

“I started directing at the age of 28 without going to film school and with 10 month old twins. I was a new mother, I had no idea what I was doing but I knew I needed to be behind the camera making images and telling stories. What I’ve come to realise is that we desperately need more mothers behind the camera - producers, camera crew, writers, editors, directors, creatives...our voices matter. Our presence matters. Our stories need to be told by us, not for us. What drew me to this project was the opportunity to talk to mothers directly and boldly, from the perspective of being a mother myself. I love projects that empower women to feel confident in their postpartum bodies. There’s no ‘one size fits all’ when it comes to feeding infants, and there's no "perfect postpartum body". That's what this film wants to celebrate and show on screen - what's not to love?”

Can you explain your creative process?

“My role as director relies heavily on collaboration - with everyone on the project from the agency creatives, the production team, the DOP and set designers to the cast and styling team. The conversations I have with each member of the team affects the end result, so it's an ever-evolving process.

“I'm naturally a very visual person, so I always start the process by doing lots of visual research, and with this project I also made sure I spoke to lots of mums about their experiences of feeding to make sure the message of the film was relevant and reflected these diverse voices. Every project is different, and with this film we were conscious that we were working with young babies and new mothers, so needed to be mindful of this when planning each shot and scheduling. We needed to plan the shoot days around each mother and baby's feeding schedules, whilst building new sets for each mother and creating an informal, relaxed environment for them to feed. This meant allowing an element of flexibility and spontaneity within our shoot schedule, resulting in getting the best performances from each mother without compromising the creative.” 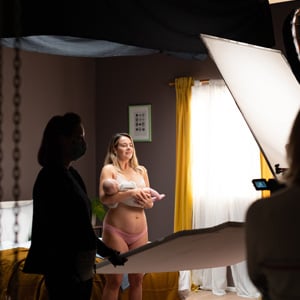 What was it like to cast for what could be seen as a delicate subject over zoom?

“Casting via zoom definitely has its challenges and of course, it's not the same as face-to-face interaction. But that said, I think it also allowed mums who were juggling childcare whilst being stuck at home the opportunity to audition, so it meant we had a lot of interest. It actually ended up feeling very personal and intimate, because we were seeing them at home with their babies, so it reflected what we were trying to get across in this film - the everyday nature of feeding and how there is a need for feeding products that allow mothers to feed wherever, whenever and however they need to.”

What was your favourite part of this job?

“That's a really hard question for me to answer because I genuinely love every aspect of directing. I guess the very end of the process is the most rewarding, because you get to see how the seed on an idea grew into a finished film. I think this film has had a special meaning for me, because it's a subject matter that I relate to on a very personal level, so I feel excited to share it with the world and hopefully begin to break down some of the stigma and myths surrounding postpartum bodies and feeding infants.”

Do you have a favourite shot or sequence from the final film?

“So many of the moments in this film make me feel proud to be a mother, and proud to be part of a campaign like this. I love seeing the moments of raw reality for many feeding mothers, like hand squeezing milk into a bottle, or seeing real post-partum bodies that all look so different. It was important for us to show women who chose not to breastfeed as well as mothers or fathers who couldn't, because there's no right or wrong way to feed a baby. So the moment where we see a father bottle-feeding, and a mother's double mastectomy feel particularly powerful.”

The offline was handled between our in-house team and London’s Okay Studio, with online done by ourselves and grade by Black Kite.

The result is a campaign that we could not be more proud of, which launches globally on the 22nd February. ‘The Boob Life’ deliverables are 1 x hero film (with and without nipple versions!), 30” and 15” cutdowns and 6” too. Our ‘Spill The Milk’ films are a series of 6 episodes, with a series of 6” teasers. We have also delivered 50 stills from the shoot.

Spill The Milk Offline: Harley Spence at The Gate Films

Love what you see. If you have a huge campaign that you want creating then Contact us below and we can bring your ideas from page to screen.